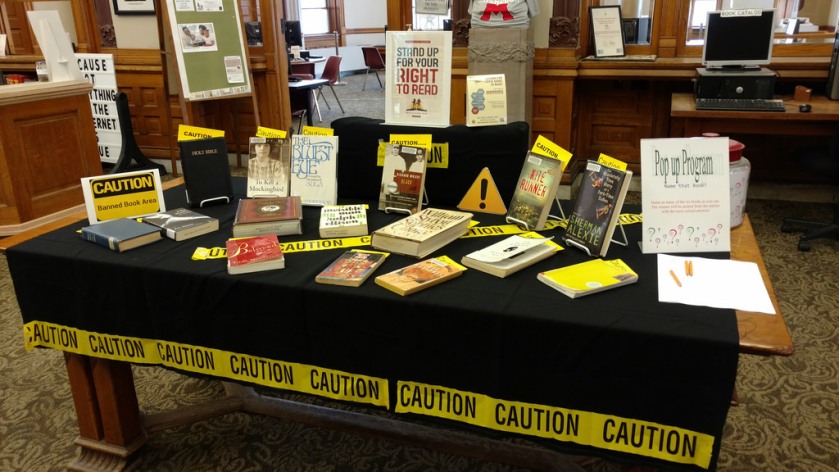 This is Banned Books Week: Celebrate Our Freedom to Read.  See Shelf Life, my monthly YA vlog, for the Banned Books edition.

“I need to schedule a conference with you, ” the message in voicemail declares.  This is not an unfamiliar request although this particular mother has caused some of my colleagues some distress.  In our small public-but-feels-like-private school and community, names can’t help but trigger associations.  I am teaching her eldest daughter in my eighth grade class, and she is a wonderful child, a voracious reader, insightful and mature, and an exceptional student overall. In my room full of students, I have not worried about motivating her.  (She memorized and performed Sarah Kay’s poem “If I Should Have a Daughter” to a crowd of admiring parents and peers, just to prove my point.)

When her mother arrives for our conference, she is carrying a book from our classroom library and clutching three-by-five cards.  “I’ve come to talk about this book I found ______ reading,” she says.  “I don’t think it’s appropriate.”   She proceeds to read from her cards carefully quoted sentences with accompanying page numbers in support of her judgment. In each example, there is profanity, words many of us as parents would like to believe our children have never heard and certainly have never used.  I have been the mother of an eighth grader myself, however, and I’m certain that such beliefs are naive.

In Alan Gratz’s recent book for middle grade students, Ban This Book, concludes that what a child reads should ultimately be determined by parents.  I would like nothing better than to have my eighth grade students share what they are reading with their parents.  I respect this mother for her vigilance; after all, isn’t paying attention one of the greatest acts of devotion?  What I try to convey to this concerned mom after acknowledging the indisputable evidence of profanity is twofold:  first, I will be more careful, more sensitive when I recommend books to her daughter understanding her position, and second, that I will not remove the offensive novel—or any of the other numerous texts, both fiction and non-fiction—that sit on our library shelves.

I bear a responsibility to all my students and their parents.  It is an onerous one at times.  My opinions about book choice are mine alone, and yet I am placed in a precarious position of helping young people choose.  I take my role seriously.

In the wake of this conversation, a couple of things happen. First when I tell my administrator, she says we must send a letter apprising parents of the range of content on our shelves and asking for their guidance regarding their child.  In addition, when we are reading something as a whole class that might be problematic, she wants us to forewarn the parents.  After the letter has been sent, most parents say nothing, giving their tacit approval to whatever selections their child makes, but a few request careful oversight and a few are adamant in support of their child reading ANYTHING and EVERYTHING he or she desires.

Later that week during our Friday “week in review” class discussion, I mention a parent’s request a few days ago and ask my students what they think about being told what they can and cannot read, where they think my responsibility lies, what they think about their parents’ concern.  These are 14-year-olds, most of them, and they are at a difficult juncture.  Their parents and society are telling them, as one of the titles in our library says, they’re Too Old for This, Too Young for That.

As usual, these kids astound me.  They get it, why their parents are concerned, how they want to protect them from hurt or harm.  What they also say is that they aren’t reading the way that mom did, looking for profanity, counting how many times a character says the f-word; they’re reading story.  As I type these words, I still get chills.  One young man opines:  “You know, Ms. Emerson, I don’t think any of us is ever reading the same book because, well, we aren’t the same.”

Wisdom, that.  And isn’t the benefit of reading difficult texts shared understanding, an invitation to talk?  Someone else, an author, has given us an opportunity to think, to question, to grow—together.  I want each of us to be part of that grand conversation.

We used to conduct a yearly Read-with-Me-Tea with seventh grade students.  My colleague and I would determine a theme, say survival or the quest for identity, and the students would select a partner, high school age or older, with whom to share the text they’d chosen from an array of text choices—a lot like the “speed dating” done in some classrooms now.  After the pairs had completed them, everyone gathered for an informal “tea” when students and their partners discussed their books with others in the class who had done the same.  It was pretty awesome, I have to say.

I would often open the tea telling the group that when my son was in eighth grade, we went through a rough period.  It seemed like our conversations began and ended with what he needed to do, how he needed to be.  Fortunately we had the love of story in common, so even when our tempers were frayed, we could find comfort in book talk.  Sharon Creech and Robert Lipsyte, Walter Dean Myers and Melba Patillo Beals, I’ve always known, saved us from ourselves.

One year, as a young man and his father were departing, the father stopped and said, “You know, Trish, it was sort of shocking to realize that my kid was reading stuff like this (Amaryllis by Craig Crist-Evans), and then we had these great talks about it, about war and family trouble, and I got to learn what he was thinking and feeling.  It was…amazing.  So thanks.”

His words were delivered out of his son’s earshot.  His son had already gone ahead.

One thought on “Our Freedom to Read”