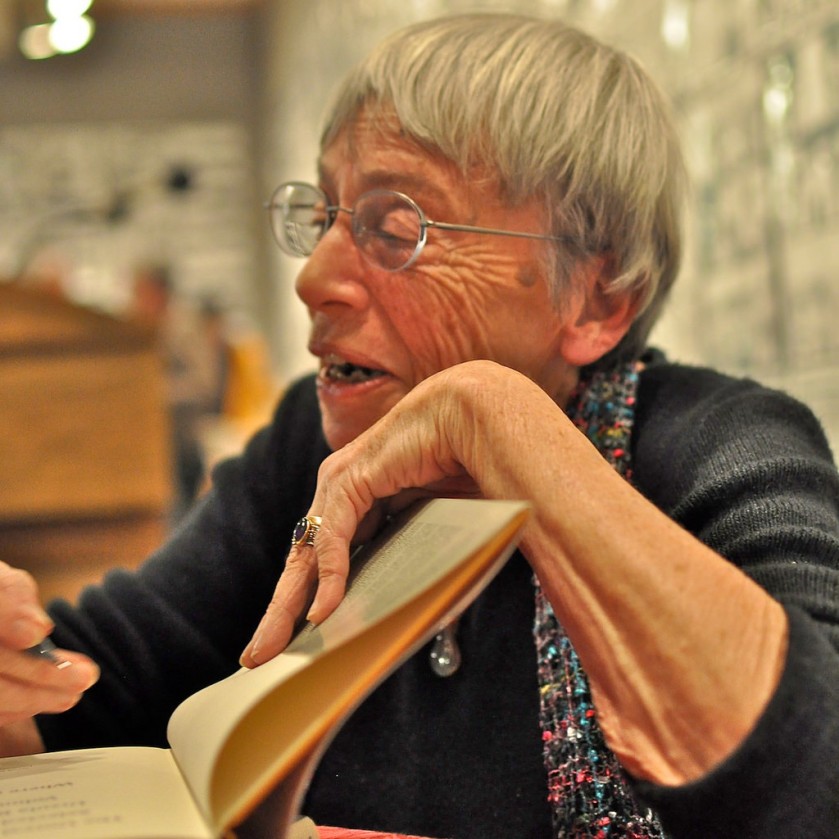 The Worlds of Ursula K. LeGuin, a 6:30 screening of Arwen Curry’s documentary, draws a standing-room-only crowd to the downstairs meeting room at the public library. Oregon has embraced LeGuin as its own for she lived, worked, and died on January 22, 2018 at her home in Portland. She and her husband had settled there early in her career, but she was born and raised in Berkeley, California and spent summers in her beloved family farmhouse in the Napa Valley.

I was not a fantasy reader, still am not, so my knowledge of LeGuin, my interest in her is recent. The Oregon Council of Teachers of English will devote its fall journal to her, and my husband is a longtime fan. Just recently he brought home a collection of essays about her writing, Words Are My Matter. The title, the topics covered, speak volumes. Early in Curry’s film, LeGuin says she can create worlds out of ink and paper. The words are the stuff of worlds—and that is true for writers. Poof! Something exists that was not there before. She just happens to be better at the creation that most.

Curry spent a decade creating the film, and as she says in an enlightening interview, that she was learning a new language, the language of film, because words are her “matter,” too. She features many contemporary writers who lend their heartfelt and glowing commentary about LeGuin to the film: Neil Gaiman, Margaret Atwood, David Mitchell, and Michael Chabon among others.

Many revelations come to me as I watch, and when I watch it again as I must, I know there will be others. In one particularly poignant scene Jeff Becker, a Berkeley High School teacher, is discussing her short story, “The Ones Who Walk Away from Omelas.” Of all her work, this is what I know best. I have read it with my college freshmen. The singular reflections of the students represent the breadth of possible response to this creation of a complex utopia, perfect in every way, except for its deep, dark secret: there is a child held in a dungeon in the bowels of the city—when residents come of age they learn this—who is denied any and all humanity. As Curry says, “Of course the student who owns that he would stay, forget the child who pays for the perfection he and the people enjoy,  and continue to live his life…well, there are people who pay for the life we live now.”

The second unforgettable moment occurs when Michael Chabon says, “She talked to me when I was 10 and still when I am 40.” Isn’t that at the heart of great writing, the essence of Rosenblatt’s transaction. No matter when you and the words meet, the magic happens, the alchemy of paper, ink, and reader: Gold!